THE DEFINITION OF END-TO-END

Philip Stevens visits a facility that brings an impressive implementation to the idea of a one-stop shop.

Digital Media Services – DMS to its friends – describes itself as an end-to-end digital media agency. Its clients include all the major film studios – taking in those from Hollywood and elsewhere, sporting organisations, such as the New York based NBA (National Basketball Association) and theatre companies.

Located close to London’s iconic Tower Bridge, DMS employs 100 staff in an 8,000 square foot facility that houses all of its creative and technical end-to-end solutions. But just how far do those ‘ends’ extend?

Digital operations director Neil Bottrill provides the answer. “Briefly, if we take a film premiere as an example, we will go to the venue and shoot talent interviews from the red carpet plus have a second roaming camera capturing all the premiere atmosphere, carry out the post production work that includes original content from the studio, distribute the material and then monitor the media coverage so that we can tell the client where the content has been used.

“We also create reports about social media coverage, so that as the event happens we are looking at the feeds coming in and can inform the client what people are talking about.”

That’s the overview, but how does that actually work in practice? “First, we will get a brief from the client. And that is pretty comprehensive as it will include details what the various fulfilments will be. They may include TV spots for channels around the world in different languages, trailers, social media content, online pieces and so on.” Bottrill continues, “In the case of a premiere, our production team – Tiger Films – shoots the content with a view as to how it will be used for marketing purposes. As space is limited on the red carpet, we are employed by the film studio, so we have unrivalled access to the talent for comment and interviews which we then make available to press.”

Further interviews can take place at the DMS studio where individual broadcasters and other journalists are granted access to the talent on a one-to-one basis. Where talent is not available for interview, content can be sourced from Electronic Press Kits that DMS also distributes on behalf of its clients.

POST HASTE
All the material then goes into post production – an operation within DMS that is split into two areas – creative and digital. Simon Briggs, DMS managing director, is keen to explain that both elements are equally important. He says: “We talk a lot about DMS and our impressive use of technology, but the creative element still has to come from human beings.

Combine the two, and we provide the technology that enables our people to create the end results. It’s very efficient, so much so that we are producing over 30 localised TV spots in a day.”

That technology is Adobe based with Premier edit suites, After Effects for motion graphics and Avid Pro Tools for audio mixing.

Briggs continues: “We have bespoke digital portals that we created ourselves to enable us to deliver a variety of material globally. We hold all the content for our clients – so that trailers, TV spots or any type of content can be readily held, created, approved and distributed. For instance, there is a great deal of adaptation, localisation and re-purposing for international distribution. But there is still the challenge of how you actually deliver but we have proved that we can do it – and that’s why Hollywood studios have chosen a London facility to deliver content on a global scale – a combination of extraordinary creativity and cutting-edge technology.”

Briggs reports that in 2016, DMS delivered over 6,500 pieces of localised content to broadcasters around the world. This year, he says, that number will probably double. “That’s an awful lot of throughput!”

“We are offering a very special service, and clients like what we do”
Simon Briggs, DMS

LOCAL VERSIONS
Bottrill picks up the point about repurposing and producing local versions of the edited material. “The creation of foreign language versions has expanded considerably over the last two years. We have native foreign language speakers that coordinate the making of the localised TV spots. All translations, whether scripts, captions or subtitles, are approved by the territories concerned. Sometimes the voiceovers are recorded here and on other occasions they are produced locally and supplied to us as a file that we then mix onsite. We provide local versions for over 50 territories worldwide, but having them coordinated from a central source means there are economies of scale.”

LOOKING AHEAD
Briggs concludes: “We are offering a very special service, and clients like what we do. We are expanding and have taken on 12 additional staff in the last three months. Recruitment can be a challenge because we have significant needs to ramp up in line with the growth of the business and one of the ways we are addressing this is by launching our academy project. This involves going straight to graduates and creating vocational training courses to bring in the next generation of talent who are good at multi-tasking and adept at dealing with the fast- paced nature of what we do. That’s a real drive for us at the moment. What we are doing is proving successful and very enticing to clients and we have established ourselves as the key provider of this unique range of services.” 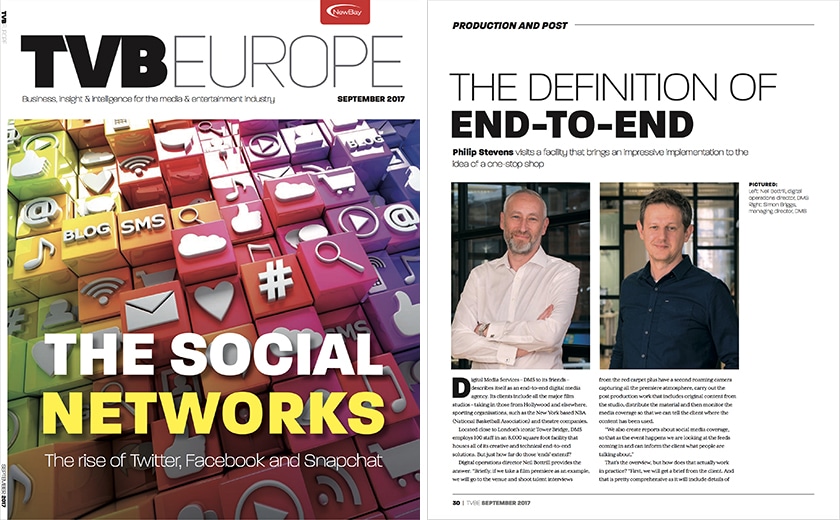 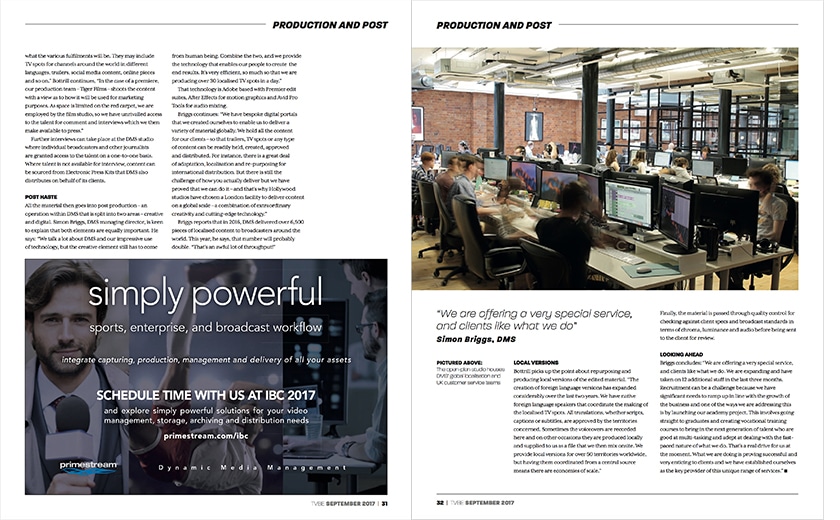