The Brands Lighting Up Social Media This Christmas

The DMS social insights team used their social monitoring tools and expertise to find out what the most influential advertising campaigns were for Christmas. With John Lewis, Sainsburys and even Aldi creating unforgettable Christmas campaigns over the last few years, the team tracked the chorus of festive hashtags and conversation to see who won Christmas and built the most brand engagement.

Historically, brands’ Christmas TV ads and digital campaigns have premiered mid-November, with Coca Cola’s famous ‘Holidays Are Coming’ TV spot kicking off the festivities and the much-anticipated John Lewis ad following close behind. Head of Social Media Insights, Anna Zaikina and her team jumped in to action and setup key words and anticipated hashtags to monitor the most discussed and top viewed campaigns, most used hashtags, and sentiment to gauge how well ads were received.

Unsurprisingly, John Lewis’ entry ‘The Boy and The Piano’, starring world-renowned singer Elton John, was one of the most influential campaigns across the board. The most viewed ad with over 12 million views, #eltonjohnlewis was also the number one hashtag featuring in 58,000 posts and was discussed 150,000 times, coming second in the ‘top discussed’ category! Interestingly, other brands had some influence on John Lewis’ campaign as #eltonjohnlewis went viral and both Lidl and Amazon sarcastically used the hashtag to sell discounted pianos – while Amazon’s ‘Can You Feel It’ campaign was discussed a total of 8,000 times.

During a period of giving and building awareness of those less fortunate, Iceland’s controversial ‘Rang-Tan’ campaign evoked a huge response with their aim to raise awareness of the devastation of Orangutan’s habit – caused by the production of palm oil. Allegedly banned by the UK advertising authority, Iceland’s TV spot become one of the biggest campaigns that no one was allowed to see as it was viewed a total six million times. Leading the ‘top discussed’ category, the Iceland campaign was discussed a massive 314,000 times, while #nopalmoilchristmas (31k posts) and #palmoil (16k posts) was third and fifth respectively in the race for ‘top hashtags’.

Winner of the ‘best received ad’ and possibly one of the funniest campaigns this Christmas, is Twitter’s #NotaRetailStore mini-campaign raising awareness of John Lewis’ yearly plight – not John Lewis the UK retail store, but John Lewis the Virginia-based lecturer who’s twitter handle is @JohnLewis.. The social media star is known for his hilarious responses to the many thousands of Twitter posts he’s tagged in, Twitter’s campaign had the most positive feedback through sentiment tracking and was discussed over 21,000 times, while #NotaRetailStore was mentioned in 20,000 posts.

The number of Christmas posts in 2018 has increased by 5%, with social engagement going up by 3% compared to 2017. As more brands are looking to have a piece of the Christmas pudding and produce more creative ad campaigns to gain further brand awareness, retail brands such as Aldi, John Lewis and Sainsburys are eager to increase sales during the Christmas period. Currys’ ‘The Magic of Christmas Upgraded’ campaign features today’s technology in olde England – offering a range of products such as the Google Home Hub, LG TV’s and the Microsoft Surface tablet. DMS’ social insights found that Currys’ campaign gained the highest purchase intent share across social platforms.

If you’re looking to gain value in your brand’s audience and want to find out more about DMS’ social media insight services, then contact Anna Zaikina, Head of Social Media Insights – anna.zaikina@dmsuktld.com 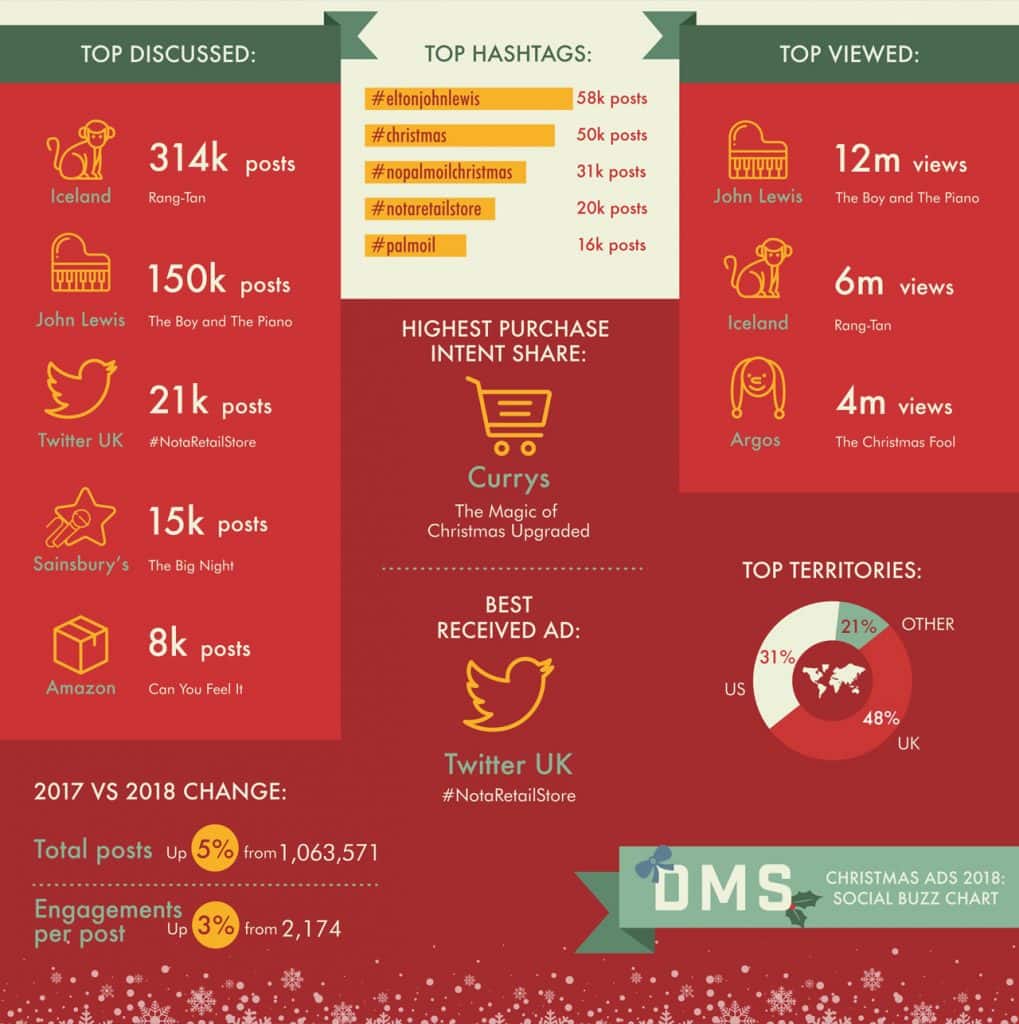 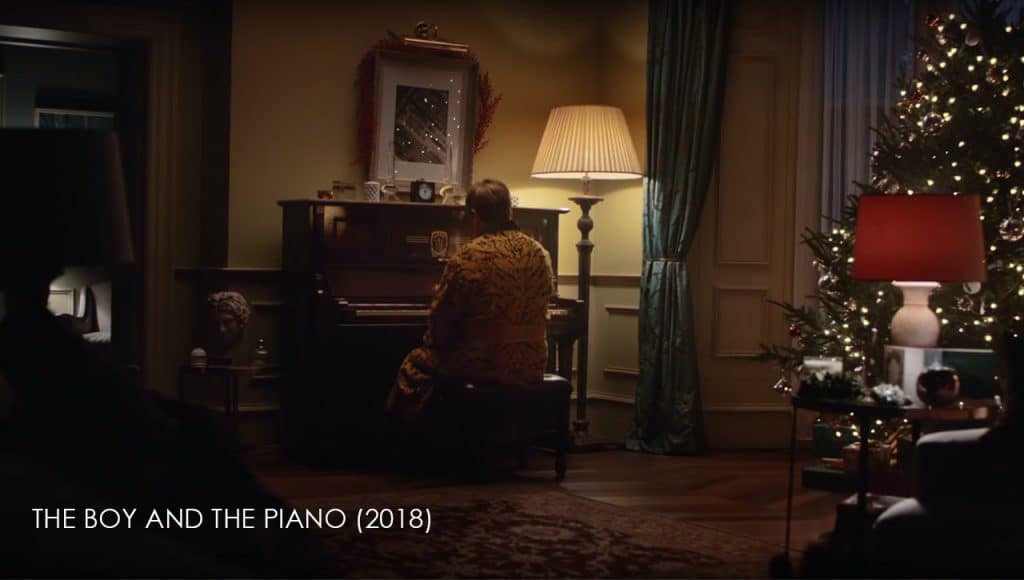 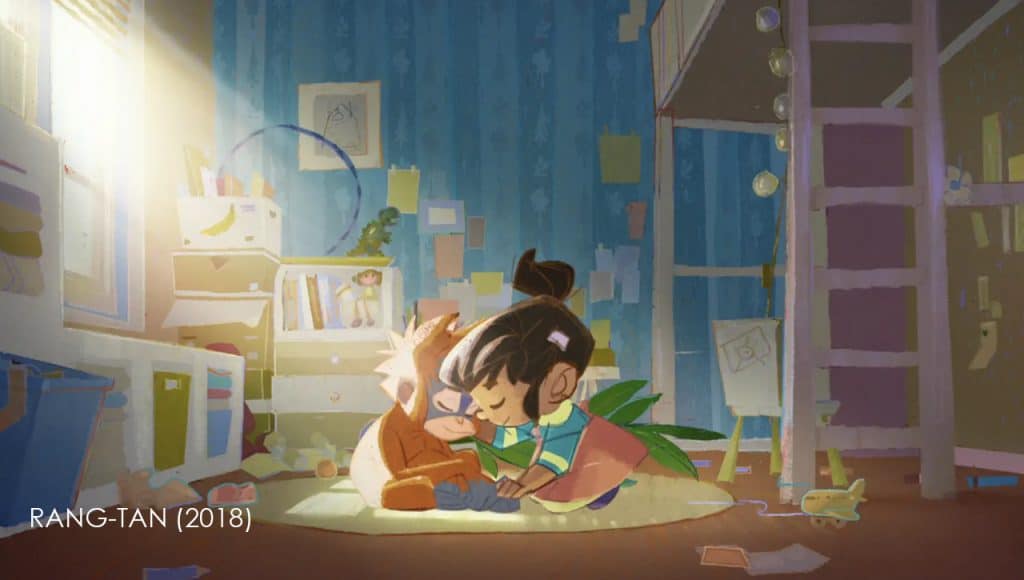