The film festival season is now over and, as always, it has generated a huge amount of buzz on social media. So, DMS’ Social Media Insights team, headed up by Anna Zaikina, took a closer look at the Venice Film Festival, Toronto International Film Festival (TIFF) and London Film Festival (LFF) to see what has been getting people talking. They focused on monitoring the top hashtags, emojis, films, talent and brands.

International film festivals are a time for film lovers to expose themselves to the newest, most innovative films and discover new talents and untold stories from around the world. Consequently, the top emojis used across the festivals reflect an overwhelmingly positive sentiment. Heart emojis were the most frequently used by social media users, the red heart appearing in over 52k posts. Popular words used to describe the festival goer experience were “thank”, “great”, “love” and “best film”.

The most mentioned film across the three festivals was Joker starring Joaquin Phoenix, who was heralded for his impressive performance as the iconic villain, with over 102k mentions. This was followed by Rian Johnson’s star-studded who-dunnit, Knives Out (41k mentions) and Noah Baumbach’s semi-autobiographical emotional drama Marriage Story (37k), both of which have also received rave reviews across the period.

Todd Phillips’ new title Joker became the first movie based on a comic book character to win the coveted Golden Lion award at the Venice Film Festival back in September, leading to #jokermovie being the most used hashtag across the festivals, with an impressive 238k mentions. This was followed by #dakotajohnson who was joined by fellow actor Joaquin Phoenix (45k mentions) as some of the top mentioned talent.

Johnson stunned on the red carpet for her TIFF premiere of The Friend, in a dramatic black Dior ballgown which resulted in her receiving over 39k mentions by TIFF fans. This helped position Dior as the second most mentioned brand across the festivals (4.5k mentions). The most talked about brand was Chanel which received over 6k mentions having provided a series of beautiful looks for Kristen Stewart in Venice and Toronto as well as dressing star of The King Lily Rose Depp at her London Film Festival premiere.

If you want to learn more about enhancing the value of your brand, or are looking for in-depth insight into your audience, get in touch with Anna Zaikina, Head of Social Media Insights at DMS – anna.zaikina@dmsukltd.com.

Like this article and want to read more? Check out some of our other articles: 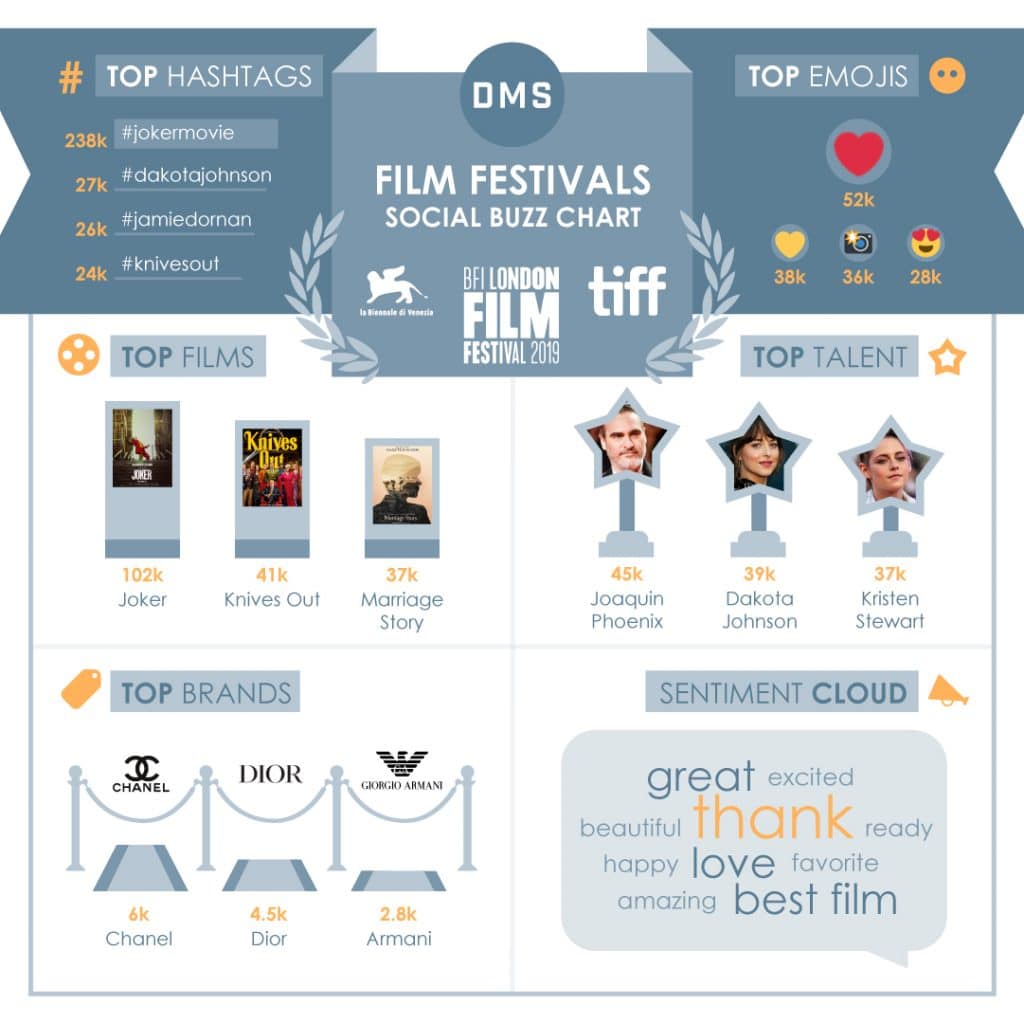