Joe Blogs: Why do World War movies keep getting made?

I’m not here to talk politics or take sides. As far as I can see, every drop of human blood spilled in anger is the product of our own inability to embrace the healing power of love and forgiveness. Having said that, Saving Private Ryan was siiiiiiick! See the problem I’m facing? I am all about the peace and love but every year a new bunch of war movies come out and I’m straight in the queue with my popcorn and M&M mix up. This year it’s 1917 and Jojo Rabbit, both of which received a lot of love at Sunday’s Academy Awards, but movies like these have been doing the rounds for over a century. As early as 1910, when The Fugitive was released, people have been pointing cameras at arbitrary groups killing each other because humans are fascinated with the romance and tragedy of war. I mean, it’s just so romantic and tragic… I can’t even… But I’m going to stick my neck out here and suggest that maybe we all just like guns and explosions. Not that we’re all bloodthirsty animals, but we do enjoy a good boots and bullets movie; we do, don’t shoot the messenger! When you’re watching a war movie, graphic scenes of death and destruction go with the territory, but when you think about it, so does an intense helping of moral messaging telling you how terrible it all is. Stanley Kubrick called it ‘the duality of man’ in Full Metal Jacket but it might just as easily be an attempt at morally justifying to ourselves and others that we’re still nice people, despite getting a kick out of watching violent battle scenes. Enter the World Wars! Over the last hundred years, wars throughout history have been depicted on the big screen, but none so often as WW1 & 2, forever linked by a heart-breaking historical timeline. And I’m going to have a go at figuring out why this is, from the vantage point of my narrow, narrow mind.

Who are the baddies?

War films are never just about the particular war they’re depicting. What, you thought Journey’s End was about life in a trench on the western front? Think again, mate! They’re usually either saying something broad about humanity or hijacking historical periods we’re all familiar with in order to comment on the political climate around the time the film was released. Have a think about it; in pretty much every WW1 film, the Generals are the enemy. Because of the nature of officers being selected almost exclusively from the landed gentry and the most common battle strategy on both sides tending to be throwing bodies at cannons until someone shouts ‘stop’, the upper classes do come off as a bit cruel. To quote Benedict Cumberbatch in 1917, ‘There’s only one way this ends, last man standing.’ It’s alright for you to say that, Benny, you suave, clean-shaven hunk of posh, you’re in a nice warm bunker! When you couple this with the fact that no one at the time, or indeed since, could really put their finger on exactly why the war got started, the subject lends itself to allegorical meditations on an unfair society where the poor are subjugated by the rich. These films surface whenever there is a mood in the modern zeitgeist that the people at ‘the top’ are taking advantage of the people ‘down below’… which, for anyone who is new to all this being alive in the world stuff, has been a prevailing opinion of working people since… sort of… always. For proof, see The Immigrant, All Quiet on The Western Front, Regeneration, Testament of Youth, Enemy at The Gates, Trading Places, Horrible Bosses, the news… The list is long, but I promised I wasn’t going to talk about politics.

Who gets to be human?

In contrast, the ‘enemy’ soldiers are often presented along with the idea that, ‘under different circumstances we might’ve been friends’. There’s a lovely scene in War Horse where a German and a Brit work together to free Joey the horse from being entangled in barbed wire. They have a bit of banter and flip a coin over who gets the horse as if they’re mates on the same side. It’s beautiful. We don’t see this all that often in WW2 movies because Nazis. It’s a different beast altogether; the word ‘Nazi’ is synonymous with evil, which means these films can give the audience a free pass to switch off the old moral compass and enjoy watching those particular human lives end. I mean, look at Captain America! To trade on his wide-eyed optimism, his first film is set all the way back in a time when there was a clear ‘right’ and ‘wrong’ we could all agree on. ‘Don’t worry, it’s ok, they deserved it, they’re Nazis.’ A perfect example of this phenomenon is in Inglourious Basterds when Aldo’s team and Shoshanna, burn down, blow up and shoot-to-mulch an entire cinema filled with Nazi commanders, Hitler among them. The scene is horrifying and appeals to the ugliest part of our nature, yet it’s framed as totally justified because of who the target is. The characters themselves lean into this, with German officers being portrayed as pantomime villains. Even common German soldiers are in the films specifically to be untrustworthy and unfeeling; like the captured man in Saving Private Ryan, who is shown mercy and released, only to brutally stab the Jewish Private Mellish in the heart and shoot Tom Hanks’ character later in the film. They dehumanise ‘the enemy’ in order to make it easier to watch them die. Very powerful stuff.

There are some WW2 movies however, where attempts have been made to flip this convention on its head and rehumanise the people of Nazi Germany. Jojo Rabbit pointedly addresses it; playing with the idea that many ‘Nazis’ under Hitler’s regime were regular people; simply affected by the time, place and pressures they were born into. One way he does this is by having every character say, as matter of duty and almost compulsion, ‘Heil Hitler’ to every single person in the room when they enter and then again when they exit. In return, each person must say it back. It’s ludicrous and it’s funny. By ridiculing the conventions and ideals of this particular strain of intolerant society, the film seeks to find humanity where we have been told there is none. So, the exception that proves the rule! Also, Taika is a bit great!

These are WORLD WARS. Not local wars, not regional wars, WORLD WARS! Most issues faced by us today, while important and emotional, aren’t the end of the world, are they? But this very nearly could’ve been! As such, the scale is literally as big as the filmmaker wants it to be. A James Bond or Mission Impossible film might tend towards the ‘we’re going to save the world’ idiom, but in a World War flick, you can really see that every resource and every human life is being thrown at this epic struggle. This can be made explicit, like the often used architype of showing huge queues of young men going in for their army medical check and receiving their kit, but the incidentals of the time period do this just as well; like the café scene in Atonement, where every man and woman of a certain age is in uniform. It always reminds me of black and white pictures I’ve been shown, of people with my face wearing the same uniform. I’ve held the medals on their chest in my hand and heard the stories a thousand times but, seeing these symbols and aesthetics animated in front of me always brings an extra dimension of reality that my childish imagination never could.

Or, how about the common trope of a small group of soldiers from a range of different backgrounds, all thrust together and required to work as a team? Thinking of Brad Pitt’s tank team in Fury and of course, Spielberg’s group of randoms searching for Private Ryan. More recently in 1917, we saw a group of soldiers on a truck, one of whom is wearing a Sikh headdress, illustrating the global reach the war had and how far across the world these young lives were scattered. Ultimately, we’re left with images of people with differences displaying unity. Is it weird that a World War can unify people in a way that peacetime just doesn’t? In any case, I’ve always seen myself in these movies and identified with the characters on a personal level. When I was a child and a young adult, I would imagine I’d be the one standing on a hill with a grenade in one hand and rifle in the other, taking out an entire enemy base on my own. The older I get, the more I realise I’m probably one of the guys in the first wave who gets taken out before the opening titles roll. It’s terrifying because it’s true.

It could be argued in that case, that films about the World Wars are so popular because the vast majority of us have a working knowledge of the history and geography of them. More than that, we are all totally down with the iconography; at least a shared sense of the iconography, based on the ideas we’ve inherited from being born where we were born. It adds a familiar structure and context to the exhilarating scenes of guns and killing that people like to see. Resist all you want; the box office numbers don’t lie. The stories are so familiar because they’ve been passed down, not just in our culture but in our family history. It’s personal, it’s the story of us, how we got here. And in justifying these horrors with moral messaging, they seem to accidentally serve as a useful, if imperfect, reminder of where we could go if we don’t keep telling ourselves it’s not good to like guns and killing. 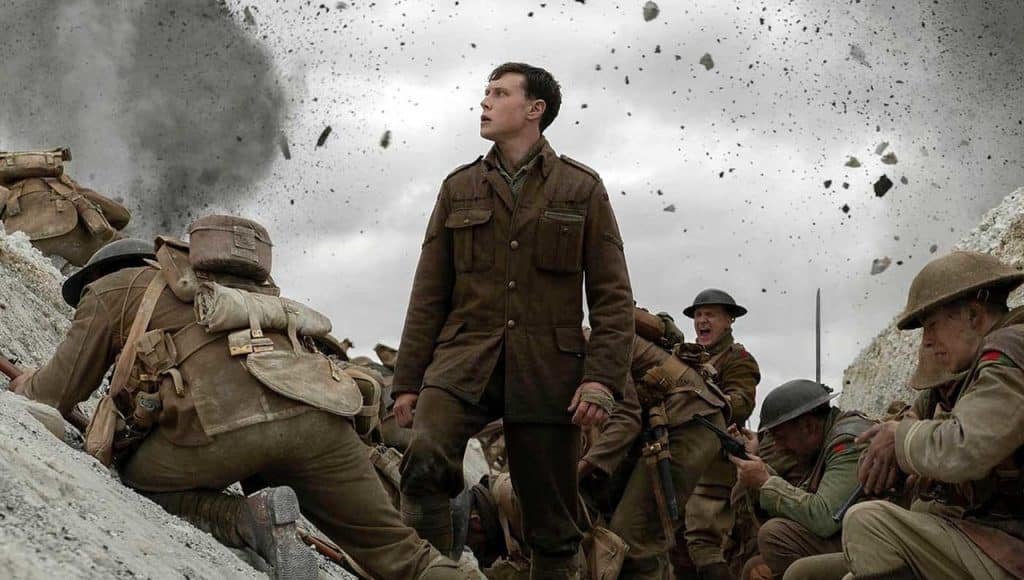 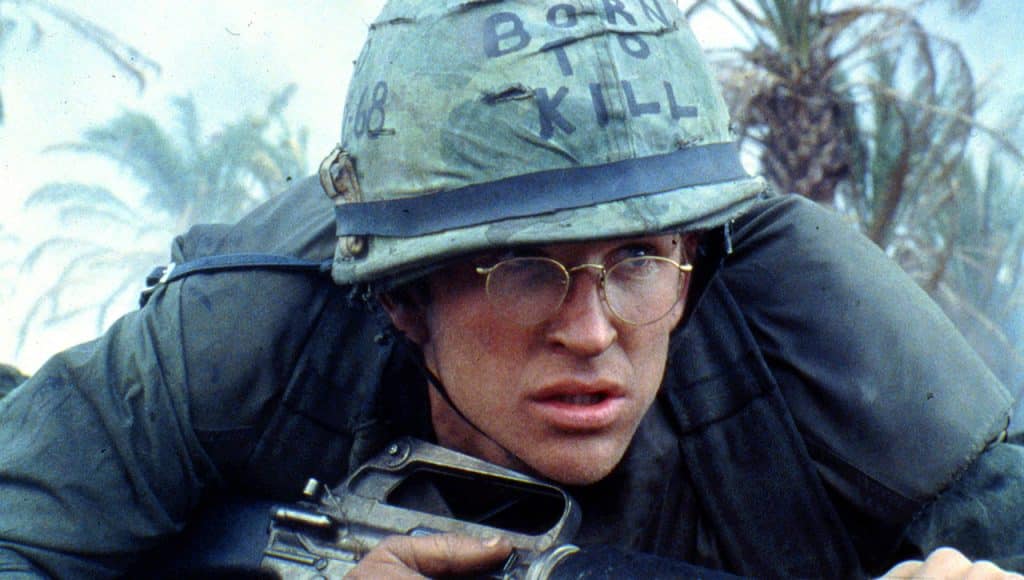 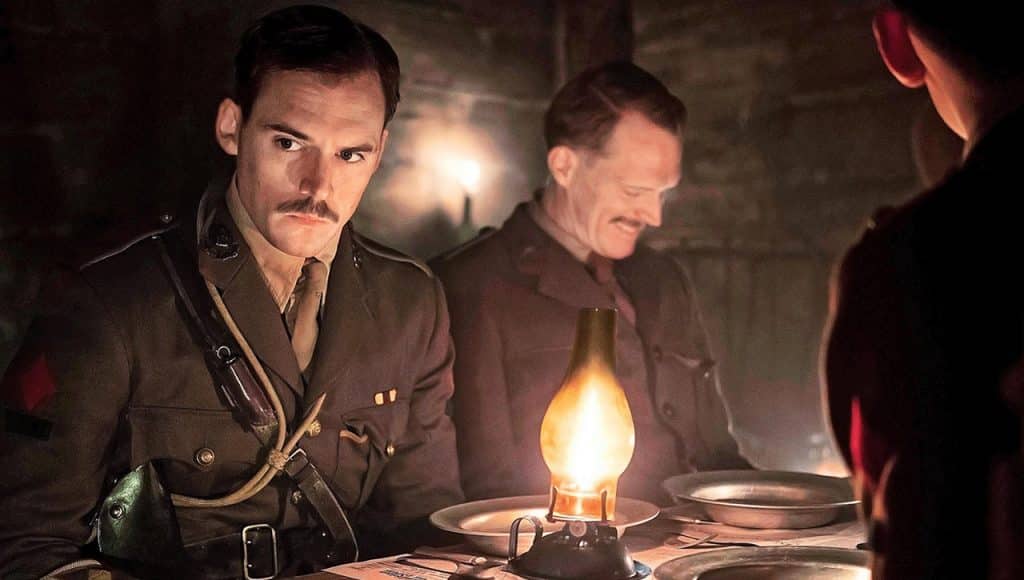 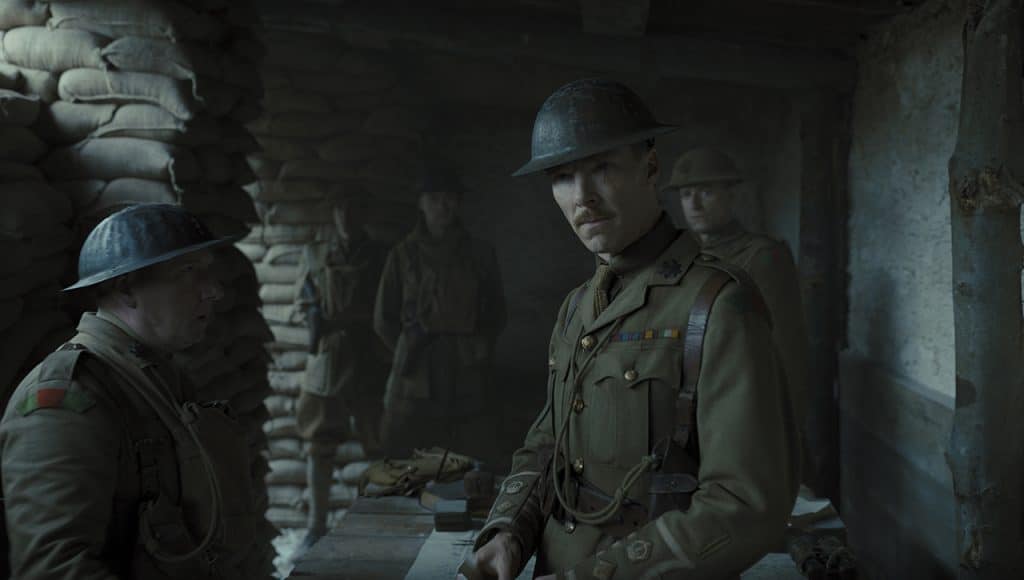 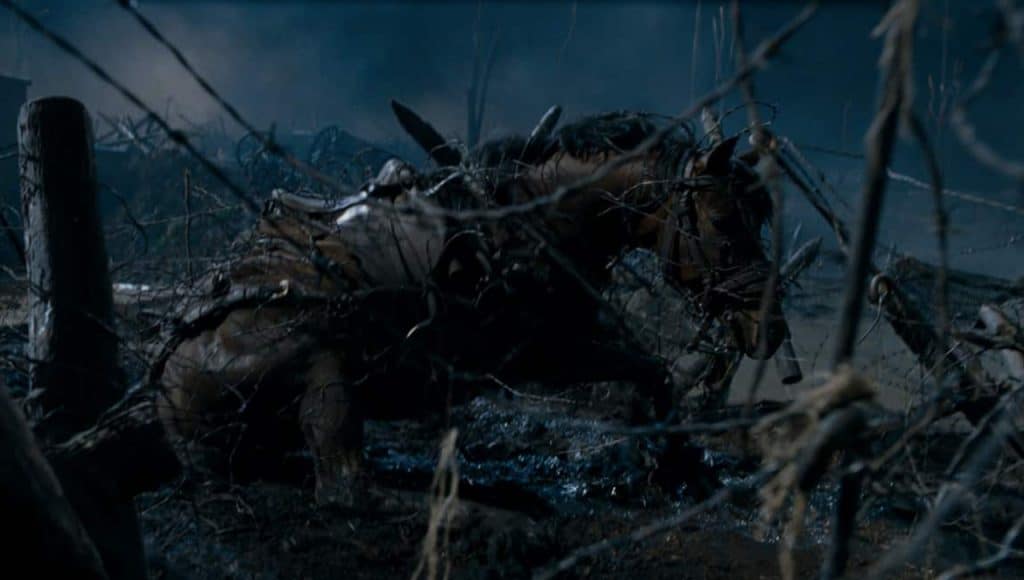 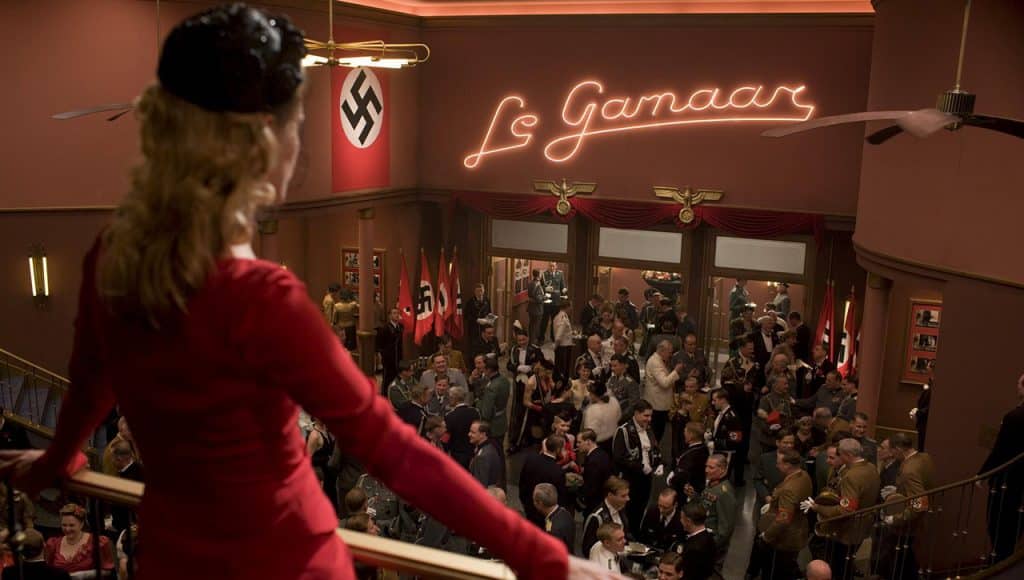 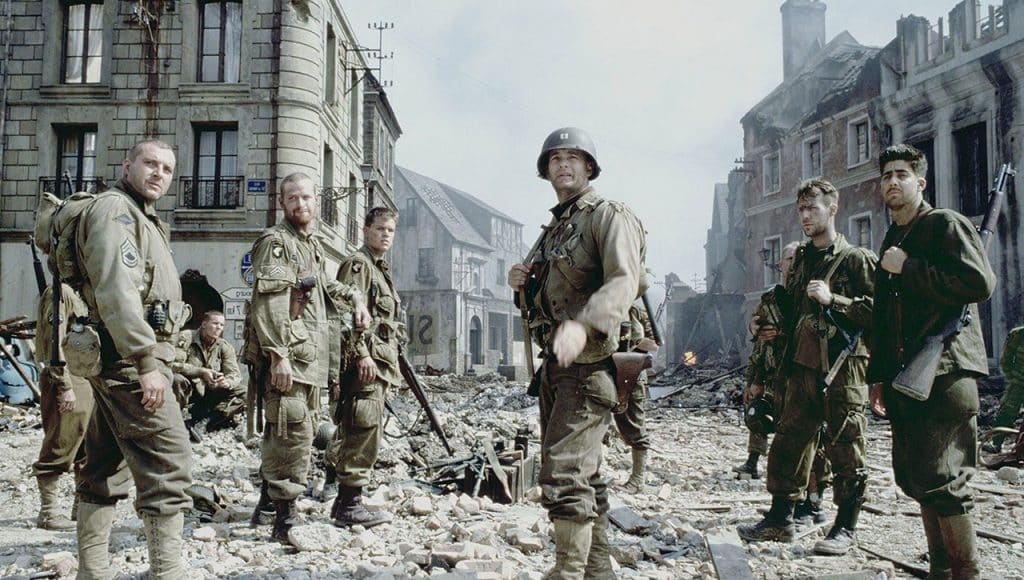 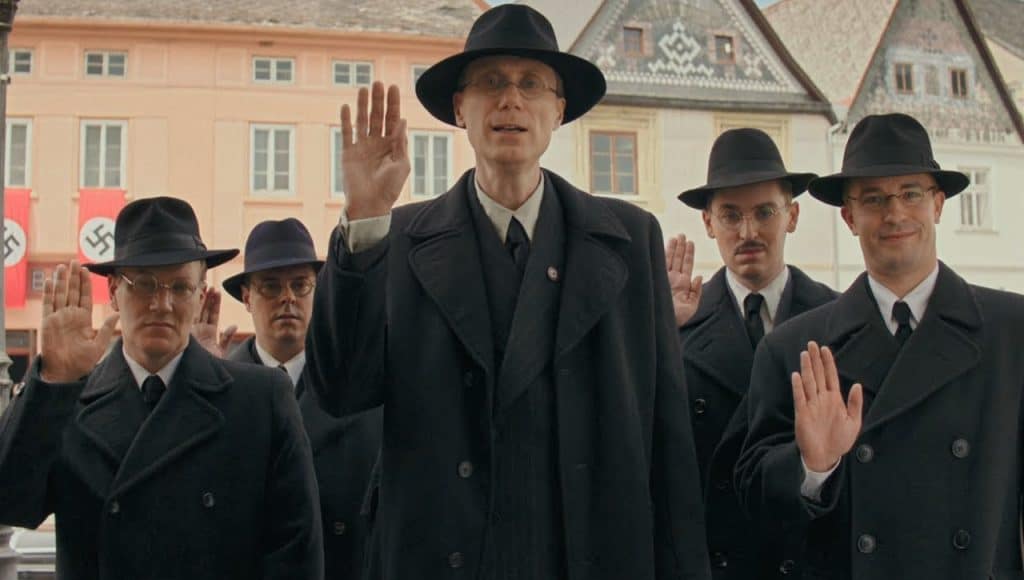 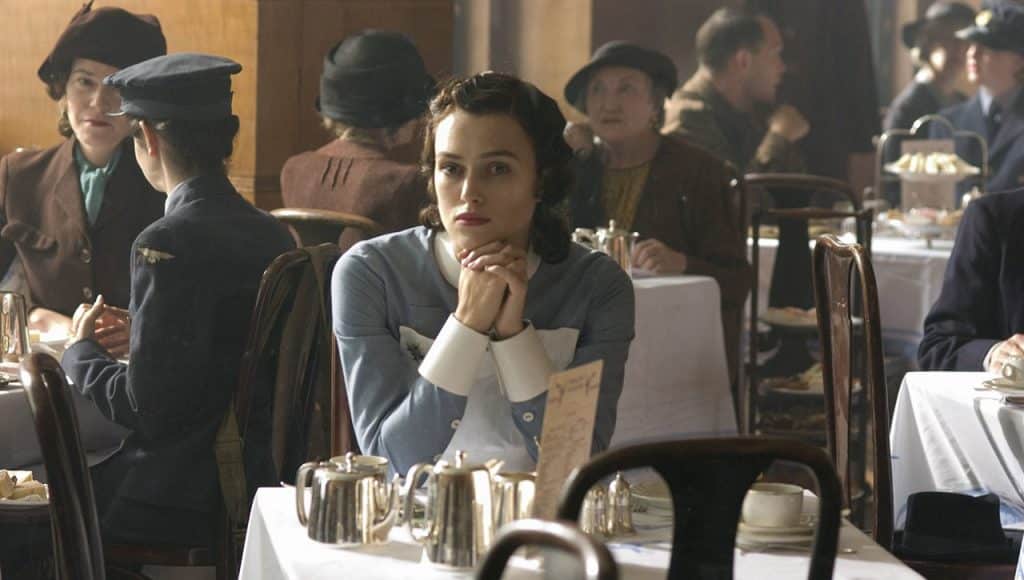 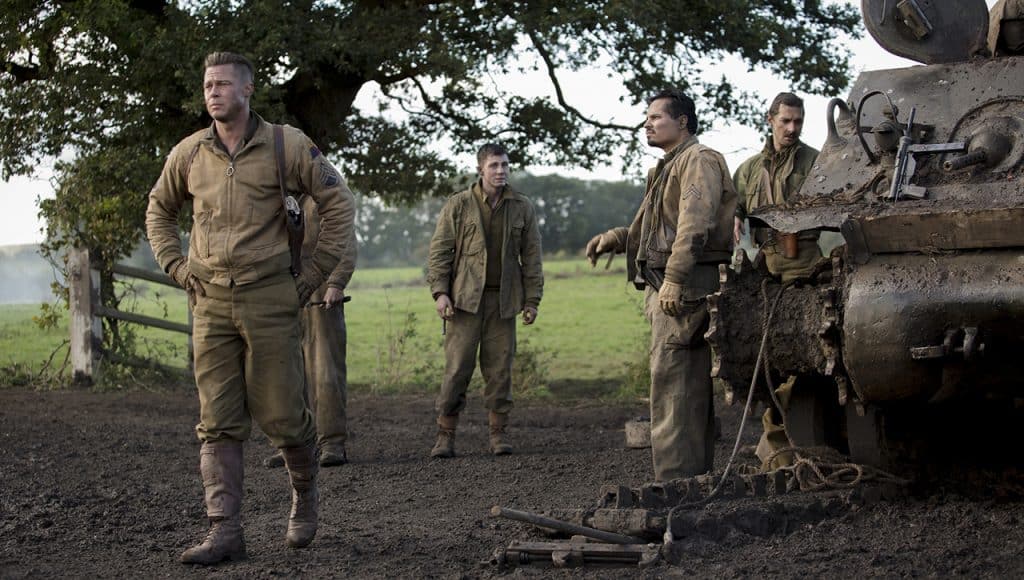