DMS turns the social media spotlight on this year’s Oscars

On Sunday night, filmmakers and movie stars from around the world gathered at the Dolby Theatre in Hollywood for the 2020 Oscars. The biggest film event of the year generated a huge amount of social buzz, and so the DMS Social Media Insights team took a closer look at the coverage to see what drove online conversations. This year, the team focused on monitoring the top hashtags, emojis, films and brands, as well as the most viewed speeches from the star studded evening.

The biggest winner of the evening was Bong Joon Ho’s satire Parasite, which rounded off it’s successful award season by picking up Oscars for ‘Best Original Screenplay’, ‘Best Foreign Language Film’, ‘Best Director’ and ‘Best Picture.’  The Korean film became the first ever non-English language film to win the ‘Best Pitcure’ award and so it is unsurprising that the film dominated social media on the night. #Parasite was the most used hashtag (appearing 771k times), and it was the most discussed film with 2 million mentions. Furthermore, Bong Joon Ho’s acceptance speech for the ‘Best Director’ Oscar was the third most watched from the evening.

Another film that led conversation was Joker. Joker received 11 nominations and walked away with ‘Best Original Music Score’ for the haunting work of composer Hildur Guðnadóttir, and ‘Best Actor’ for Joaquin Phoenix. Phoenix, who has won several awards this season for his acclaimed performance, gave yet another politically charged speech, causing the film to receive the second most common hashtag (170k), film mention (561k) and acceptance speech views (688k).

Outside of the film nominees, one performance from the evening seems to have driven a huge amount of activity. As part of an international ensemble performance of “Into The Unknown” from Frozen 2, Thai singer, actress, and television host Gam Wichayanee exploded online, featuring heavily with hashtags #gamwichayanee (158k uses) and #gamintotheoscars2020 (97k) and highlighting the massive international audience for the show.

The raft of nominees at this year’s awards echoed the exceptionally high quality of work from the industry in the past year. The celebratory atmosphere was echoed on social media, where the clapping emoji was used in relation to the awards 212k times, the heart emoji featured 132k times and the trophy emoji was awarded to posts 130k times. The Academy’s nominations were also met with criticism as many highlighted them lack of diversity within the ceremony. The show also featured an emotional performance of The Beatles song ‘Yesterday’ by Billie Eilish as part of the “In Memoriam” section of the evening. These two talking points may have influenced the volume of posts featuring the crying face emoji, which was the second most used emoji (133k uses), and the sad face emoji (91k uses).

The lack of diversity within the Oscars nominations influenced the most talked about fashion choice of the evening. To protest the lack of female directors recognised this year, actress Natalie Portman had the names of several snubbed directors embroidered into her Dior cape. This resulted in Dior being the most mentioned brand on social media with 112k mentions. Finally, Versizon made it’s mark on social media from 250,000 miles away! In a world-first, immersive Oscars experience, Verizon gave viewers in Times Square New York the opportunity to “walk the red carpet” at the Oscars, using a 5G-enabled smartphone powered by its Ultra-Wideband 5G network. As a result, the brand gained huge amount of coverage on social media, with 24k mentions throughout the evening.

Like this article and want to read more? Check out some of our other articles:

The brands lighting up social media this Christmas 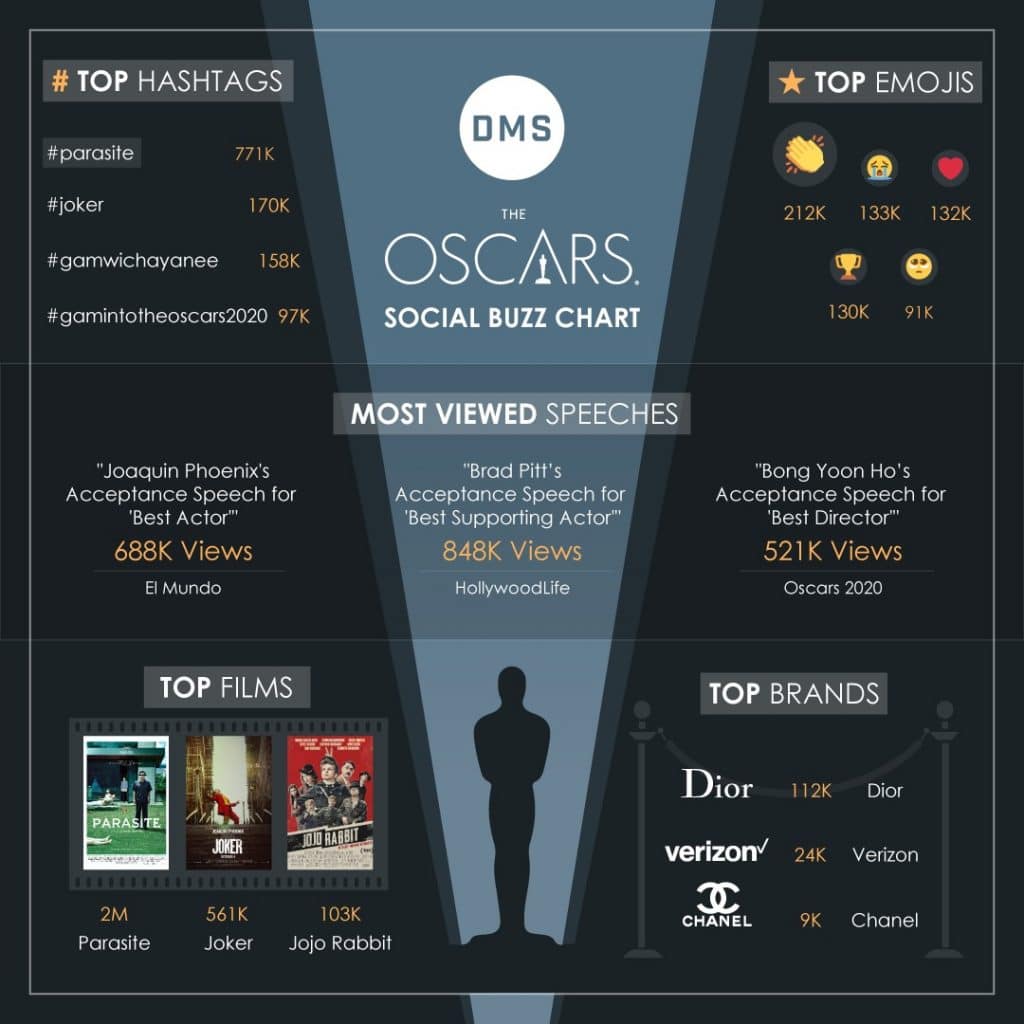