Cute’s The Word – What drives your mentions?

From the 1st June till the end of August 2016 there were 174,593 mentions of the word cute, or cutest on Twitter, in relation to some of the top animation movies released this summer. Overall this number accounted for 3% of the films’ mentions.

That’s powerful stuff. The word cute saw particular increases with the release of characters, namely Baby Dory and Baby Moana, however the word was also used for other characters, as well as generic mentions of the films.

The word cute therefore has Klout and gives an insight into how to engage the public, and not just the children in order to generate awareness and instigate intent-to-view.

However, saying that cute characters build awareness is not necessarily ground-breaking stuff, but what is important is the up-take it generates, in particular amongst female meme-style Twitter accounts. This is the last piece of the puzzle.

Take a look at this post below by author “Common White Girl” – one post alone generated over 20,000 retweets and 26,000 likes, now THAT is powerful stuff, in particular as it sometimes overtakes the actual official film studio’s accounts. 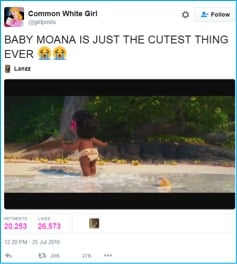 Aside from the numbers what is great about this post is that most of these retweets will be made from this type of author: “young, female, who is active online and likes animated cute films” in other words, (outside of kids) a big target audience for the film studios.

So here’s the real learning, cute characters are going to tug at the heart-strings of your audience, but it’s the “common white girl” authors out there that will help carry that message for you.

If you are interested in finding out what drives your mentions and who can amplify your message get in touch. Robin.mcdonald@dmsukltd.com or Jackie.balchin@dmsukltd.com